Peripheral Neuropathy can manifest itself as abnormal sensations such as burning, tingling, numbness, and pain. Often, patients report feelings of ants crawling on their skin. Treatment can include medications, infra-red light therapy such as Anodyne, and surgical nerve decompression. Dr. Zeetser is one of the few physicians in his area that offers infra-red light therapy. 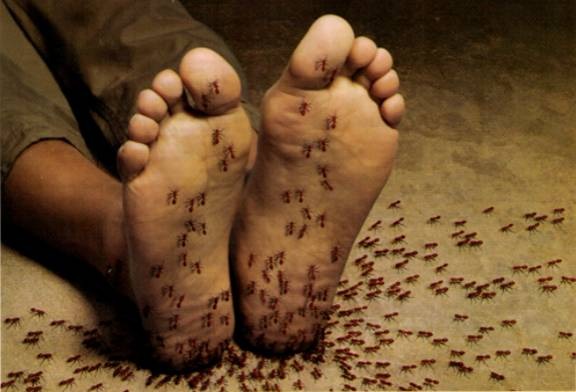 Although annoying, these sensations typically represent the early stages of diabetic neuropathy. Often times, the condition can progress to a more dangerous form in which sensation to the foot is diminished or completely lost. With loss of protective sensation, the foot is at a higher risk for complications, including open wounds and infections. Coupled with a bony deformity and ill-fitting shoes, this is a recipe for a disaster. When a diabetic with neuropathy cannot feel rubbing inside the shoe, or cannot feel a cut, scrape, burn or other injury, a wound or infection often ensues.

An additional form of nerve dysfunction that occurs in diabetics is autonomic neuropathy. These nerves control the sweat glands in the feet and their loss causes the feet to become dry and cracked, allowing entry portals for fungal and/or bacterial infections.

Besides sensory related damage that occurs to the nerves, diabetics often have damage to the motor function of the lower extremity nerves. These nerves control the fine movements of the muscles in the foot and lead to muscular imbalances between the many separate muscle groups in the foot. This often results in severe contractures and deformities in the foot, including hammertoes, bunions and plantar metatarsal prominences. These are all potential sources of abnormal pressures and can lead to diabetic pressure wounds.

Damage to the arteries leads to decreased blood flow. This, in turn, causes poor healing and spontaneous wounds, which become easily infected leading to an increased incidence of gangrene (followed by some level of amputation).

Many times, a vascular surgeon is utilized to perform some form of intervention, whether arterial bypass or angioplasty. Dr. Zeetser works closely with very highly regarded vascular surgeons in the area on these types of complicated cases to achieve the best possible outcomes for his patients.

In general, diabetics are systemically compromised and therefore more prone to infections from a variety of micro-organisms. Fungal infections to the nails and skin are extremely common in diabetic feet and result in destruction and eventual disfigurement of the toenails. Thickened nails result in excessive pressure on the nail bed, causing ingrown toenails, sores beneath the nail, and increased risk of toe infection. The damage caused by the fungus in the skin or nails opens the doorway to a secondary infection by dangerous bacteria.

More often than not, the infection is polymicrobial (multiple types of bacteria) including even the media publicized staph infection - MRSA, making these infections more difficult to treat with traditional antibiotics.

Diabetes remains the #1 cause of lower extremity amputations in the United States, accounting for approximately 80% of the 120,000 non-traumatic amputations annually. Frequently, the first reaction by many physicians is to eliminate a complicated wound by performing a below the knee amputation. This eliminates the wound problems, but creates a life-altering change in the patient's mobility, not to mention new challenges with prosthetic limb use. More unfortunate; however, is the accelerated breakdown of the other foot and often a reduction in lifespan.

Limb salvage is the specialized care that involves preservation of as much of the limb as possible, allowing the patient to retain a functional extremity. Diabetic foot wounds that are typically being treated with below knee amputations often can actually be healed with a partial foot or toe amputation.

Dr. Zeetser is willing to take the time necessary to aggressively manage these complex wounds, using the latest surgical techniques and technologies available. He coordinates his patients' care with other medical specialists, as needed, to provide a "team approach" for the optimal outcome.